Read more »
Posted by TumaGonx Zakkum at 05:28 No comments:
Email ThisBlogThis!Share to TwitterShare to FacebookShare to Pinterest

I have use it for about 2 weeks now, and found it very useful for me (men with 128Kbps). First, it is (as this writing) the only one that offer free 999MB (yeah) of space and bandwidth/day (free registration needed for url leeching).

Goodies:
- While its autogenerated link is tied to your IP and limited for 8 hours, it does a *resumable link*. Meaning you could use curl or wget or other download manager to continue download with the a renewed link.
- Fast leeching! I don't know what most people say about 500KB/s in average but I'd say that's fast!
- Your account isn't tied to IP or any kind of that mechanism. Meaning you can operate multiple turboupload accounts from each browser you have simultaneously.

Cons:
- No executables allowed. Hmm.. actually that could be a showstopper :(

Usecase:
- You need to download a (supposedly big) tar snapshot from a git server like gitorious or github (aka non resumable download)
- Says it's about time for you to inquire some stuff from slow underground ftp sites you found at proisk.ru
- Your connection can't keep with the hourly changing file update like MSSE


Posted by TumaGonx Zakkum at 16:37 No comments:
Email ThisBlogThis!Share to TwitterShare to FacebookShare to Pinterest

I'm on my way updating several chm release now: Sketchup 8, Blender 2.5 and others. I use WinHTTrack rather than wget to download more complex sites like wiki pages. Here some important scan rules to get relatively clean offline wiki site:

It's important to make sure you don't have "+*.png" or any other image types scan rule! instead use "Get non-html files related to a link" option in links tab to get images. Wiki is known use fake link to image file which actually a html file which confuse the spider.

Edit: since we don't download the intermediate html file, a regex like this could be used to clean the broken link on all images:
<a href="http://.*?>(<img.*?)</a>  replace with $1
Posted by TumaGonx Zakkum at 13:10 No comments:
Email ThisBlogThis!Share to TwitterShare to FacebookShare to Pinterest

Url seems keep updated/changed though so better use a sniffing tool (nah no need wireshark to do this, smartsniff should be enough) to spot that url inside network packets... yeah I hate these crap nowadays "download an web-installer that download full installer during which sometime embed another installer (internet toolbar thingy anyone?)". What a pile of **** just give us clean msi please!


Update 26 May 2012:
- now if somehow symphony stopped working (not started), deleting 'IBM' folder will reset settings
- revert to use soffice.bin since some featured hardcoded to this, thus do not run openoffice with symphony
- in 64-bit windows symphony didn't quit cleanly, fixed
- workaround for path with spaces

Update 12 May 2012:
Apparently IBM has discontinued Lotus Symphony, what a shame :( (last version is 3.0.1)  so I decided to update this:
Portable Lotus Symphony 3.0.1 fixpack 1 All languages 194 MB or
Launcher only (to run pre-installed symphony 3.0.1 unmodified in portable mode) 678KB

Notes:
- Although this was less than half smaller of original installer (570MB), it is really full version :)
- All jars and zips were unpacked so you may experience slightly better responsiveness
- Startup (as older version) also has been tweaked, it should be significantly faster than the original, especially after first run
- Although IBM has offered Symphony to Apache OpenOffice as open source, do note that this download remain illegal except the launcher download


A continuation of my guide here, I made small launcher (basically a 7-zip SFX) to make Lotus Symphony a little more portable. This is based on version 3 with fixpack 3, the SFX installer will extract to PortableSymphony3 folder from there run launcher.exe (symphony.exe.bak - the original launcher- has been renamed as I don't use it).

Unlike the original Symphony this one will kill soffice.bin (file has been renamed to prevent conflict) after exit to make it usable in removable drive. One caveat: don't run multiple instance of it... but that shouldn't be an issue as it was a multitabbed office anyway.

If you wish you could manually extract it with 7-zip 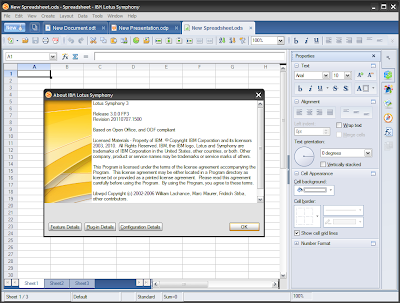