Weeks of Maps and TPX

I've been spending 2 weeks dealing with maps for several related projects, exploring several (new to me) better projections such Cahill-Keyes-Waterman and Fuller. Probably GIS guys already knew this stuff but in case anyone (newly) interested in maps I have some tips.

OK first what about google maps, google earth or wikimapia? well if you ever find a reason for not using online resources then read on.

Since many Earth datasets has fall under public use, there are many efforts to bring "open source" friendly yet highly detailed maps for mere mortals. Unless you're GIS guys you may not need SRTM, Landsat, VMAP, WVS, CDC's shapefiles and others as there are several ready to use (or easy to setup) maps for people with zero GIS experience.

Raster maps (not ready to use but easy to setup) :
- http://www.paulillsley.com/gia/index.html

Among above vector maps, wikipedia map probably the one that readily editable. For inkscape users, 15MB file is quite common/average but 15MB of just polyline is really heavy one! I have been using Tpx for some months now and it fulfill my need of semi-technical drawing. When I try to open World98+ map above, I thought it will suffocated but Tpx handle this file with just 60MB of RAM. Trying to do this with inkscape will freeze your computer winamp's playback -_-! But then how to edit this file efficiently?

Well in Tpx the drawing area is "barely" movable and zoomable, redraw takes several seconds (at any zoom) but no redraw for undo though. So maybe with more powerful CPU it may do. But there is easier way. Since Tpx spend little memory, you don't need to worry of running out of memory (how convenient).

Tpx don't have layering system like inkscape nor understand xref like CAD. So we do chunked file management. 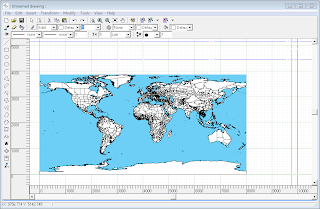 - copy-paste each region into new session of Tpx 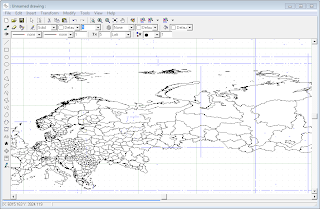 remember that copy-pasted chunk will preserve coordinate/location, so to merge back simply use copy paste operation again.

- the ideal editing workspace is at country/states level: 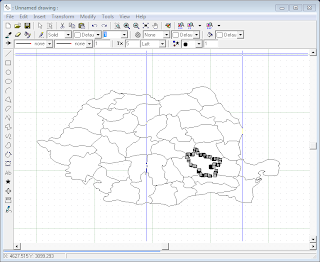 Good application is the one that have good combination of stability and features not bloatness, and part of the stability is smart memory management. Tpx may lack much of SVG features such as gradient ramp/mesh but talk about mission critical apps: "before you can edit you need to open it!". Sorry if I sounds like making a dig to inkscape, but damn they sure know how to make bloat. I want my old sodipodi back!

Additional note: In case you wonder how the world98+.svg created from http://commons.wikimedia.org/wiki/File:World98.svg. The metadata says:

yeah a real world app huh!?
Posted by TumaGonx Zakkum at 00:19 No comments:
Email ThisBlogThis!Share to TwitterShare to FacebookShare to Pinterest